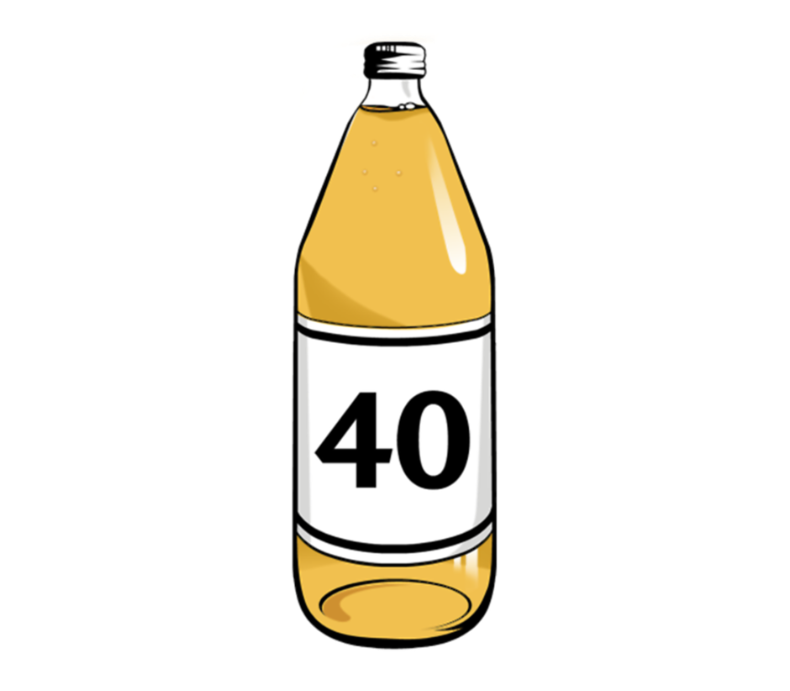 This type of bottle is commonly used in America for the commerce of malt liquors. Beers such as the Olde English 800, Mickey’s and Colt 45 have been sold in this format. Its name comes from its volume capacity of 40 fluid ounces (1,18 L) which makes its size slightly bigger than three times the standard beer bottle.

Because of its size and because of the amount of alcohol it contains, drinking beer in this bottle format could compare to finishing five regular cocktails. It goes without saying that, after drinking a forty, many are those who can feel the effects of the alcohol. It might be for this reason that the forty became so popular with the youth soon after its introduction. Trending first in inner-cities, these containers slowly but surely made their way into the celebrations of suburban populations and even into hip-hop and rap tunes. In the late 1990s’ and early 2000s’, the forty even had a presence in punk music with groups like Sublime and The Casualties composing melodies in its honour. This large-format of malt liquor bottle was so popular that there existed, for a brief period of the mid-1990s, an even bigger version: 64-ounce containers.

With the youth’s enjoyments came, inevitably, overuses and wrongdoings. As the forty became a recognized party must, it was swiftly labelled as “liquid crack” and as “the date-rape brew” by drug counsellors across the United-States. In some states, it even became illegal to sell malt beverages in forty-ounce bottles. Among those figures Florida which set the maximum bottle size for selling malt liquors to 32 US liquid ounces.

Nonetheless, the forty remains and ignoring its existence would be faulty. For this reason, Aquatech-BM offers advanced bottle-washers adapted to various bottle sizes including the 40-ounce format.

With its width and length paired with only a thin neck, this bottle is quite complex to clean. However, with Aquatech-BM’s advanced technology capable of rinsing dishes at more than 190°F (88°C), reutilizing bottles will be achievable with a restful mind. Moreover, these bottle washers are compact, equipped with user-friendly and are made to last. Save your time for more relaxing activities thanks to Aquatech-BM’s technology!